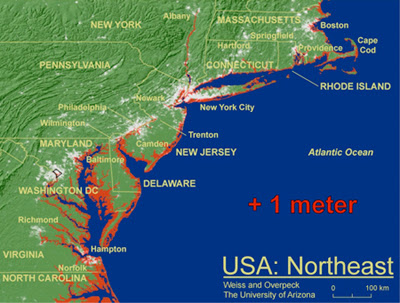 Although I have the blocks carved for a print about transgender that I was working on before I moved, I can't quite get the energy to keep going with it right now. I'm anxious to try out my new studio, but I want to do a print that isn't very fussy while I get the feel of the new space. An article in this morning's paper caught my eye. It was about new predictions by scientists at the University of Arizona that in the next century sea levels will rise by one meter (39 inches) no matter what actions we take to try to halt it. Some scientists say it will happen as soon as 50 years from now. This particular study showed maps of United States coastal areas and how they would be affected by a 1-meter rise in sea level. It looks truly catastropic.

I was never happy with the print I did about global warming, so today I started a new one. As usual, I'll take you through the steps. Tonight I planned the design and tomorrow I'll transfer the drawing to the blocks and hopefully start carving.
Posted by Annie B at 8:53 PM

Hi, Annie. I read your post then went to look for the article in The Arizona Daily Star on line. So I may have ocean front property some day, just like George Strait sang about :)

Here's a snippet from "Ocean Front Property in Arizona." (to be listened to with sound turned on).

Too funny. The song, I mean, not the ice melt. I just discovered that iTunes has a karaoke version.

When I lived in New Mexico we went to a place up toward the four corners where there was once a great inland sea. Found shell fossils. The earth goes on, with or without us.

I'm sooo glad you are back. Yes, I'd like it if you took me through your next project, step by step.

Climate change has been weighing heavy on my mind lately. Concerning climate change, these scientists are making estimates, guesses about further changes. Sometimes I fear that our environment will hit a tipping point and begin decline, exponentially.

Good topic, I look forward to following you through your process.