We Were Here First

I wanted this print about the borderlands between Arizona and Sonora Mexico to include some kind of reference to the first inhabitants of the area -- the Native American tribes, probably Yaqui people who were descended from the Aztecs. I found some photos of petroglyphs (rock art) from southern Arizona and decided to use carborundum to make a textured rock-like print. Carborundum mixed with acrylic gloss medium can be painted right onto a woodblock to make textures, but when it's used with the moku hanga method the wood prints as well as the raised carborundum areas. I wanted only the carborundum painting to print, so I used a piece of acrylic acetate as my matrix thinking that it would resist the waterbased inks more than wood. Here's the clear acrylic acetate sheet with the carborundum "petroglyphs" painted on: 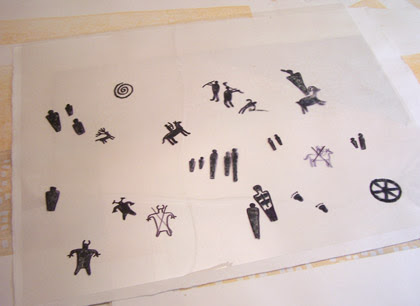 After the gloss medium and carborundum dried, I taped the acrylic acetate to the woodblock so I could use the block's kento, then painted pigment onto the carborundum drawings with a regular watercolor brush. After experimenting to find just the right amount of pigment that needed to be applied, I got a nice indistinct print that looks something like sandstone. 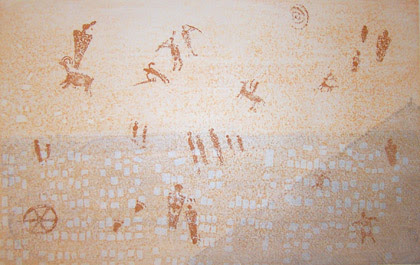 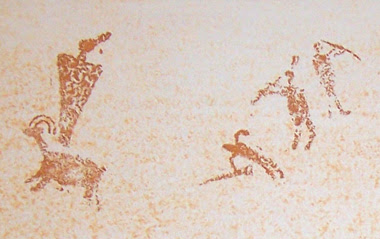 This is great method for getting painted/pictorial elements into the print, and a very ingenious use of carborundum, never heard of it being used like this -- congratulations!!!

Are you wiping off the pigment around the images when printing, or are you leaving them on the acrylic sheet?

That IS the coolest.

Thanks!
Tibi, I learned about carborundum at a workshop I took last year at Zea Mays Printmaking, called "Printing On Plastic." The carborundum work was all done on a press using a fairly thick plastic plate, but I've been experimenting with using it moku hanga style. In this case I didn't do any wiping, but I used a small brush to apply the pigment so there wasn't much excess ink to worry about.

Thanks for the clarifications. Do you have any problems with the actual printing? I imagine the carborundum might tear the paper when the baren is pressed & moved on top of the paper.

Annie, the print is beautiful. I love the color. Do you wet the paper? There are some fine cave paintings in Tecate Baja C México just in the border , 30 minutes from San Diego if you are in the area sometime.

Ingenious! I love petroglyphs and used to use them in my imagery extensively, as we lived very close to the largest grouping of petroglyphs in the US. In fact, my daughter wrote a book, Native American Rock Art: Messages from the past, which is still in print. It is a book for young adults, but has a lot of good info. in it. And, that's my pitch! Great print coming - I love it already!

Tibi, I too was afraid the grit would tear the paper, but I found that with the paper just slightly damp and a light baren pressure I had no problems. I imagine that if you used oil-based inks they could be lightly rolled onto the carborundum and a similar look could be achieved.
Thank you, Guadalupe. You live in Baja, do you? I've heard it's very beautiful there. I'm printing in the Japanese moku hanga method, so the paper is dampened for printing, but not wet.
Sharri, what's your daughter's name? She sounds well-published, and her books (maps, petroglyphs) mirror my own interests!

OK thanks for the follow up link to here-- this is an interesting technique.

I've added your blog to my blog roll so I can keep up now.

This is a very interesting technique. I have a couple of questions: [1] What grade of carborundum did you use? [2] How many impressions will the "plate" hold up for? Thanks for sharing your process so extensively!

Hi AEleen,
The carborundum was "100 grit" which is fairly coarse, I think. I don't know how many prints would be possible with this one plate, but I can tell you that I made 15 impressions and didn't see any degradation.