The portrait of Lincoln I've been wrestling with has taken a turn. Let me show you what happened.

Yesterday morning I pulled out some better proofing paper and worked on my pigments to get the red and blue colors to match the sample swatch that Julia Talcott sent me. (Julia is the Boston illustrator who organized this (Un)Limited print exchange.) Then I took a few proofs of the two blocks with the adjusted colors. 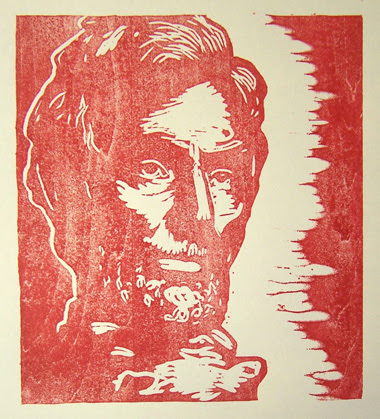 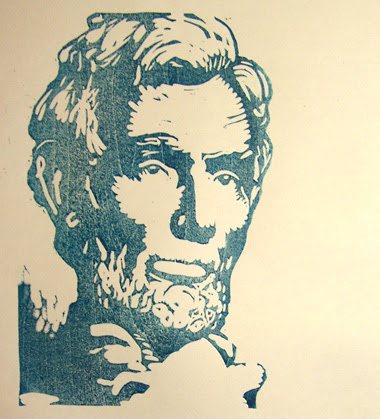 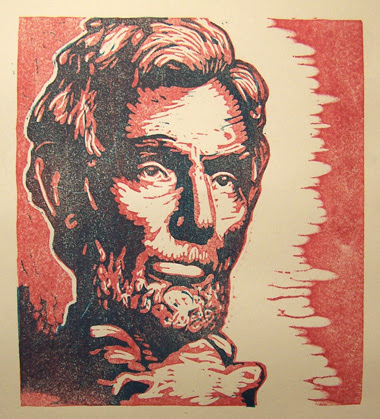 Composite of the 2 blocks

Right away I felt that the overprinting of the blue and red was too muddy, and that the transparent pigments I use for moku hanga would be really hard to adjust for a pleasing result. I also felt that something was lacking, but I wasn't sure what. So I hung the proof up on my wall to contemplate what to do next.

That's when Rob Dunlavey, another illustrator who's participating in (Un)Limited, commented on my proof on my Flickr site. He asked me a simple question that hit the spot for me. He wrote, "will it speak to your other work?" That question helped me see what was missing: I had simply portrayed Lincoln with no comment. I never do that. I always say something about my subject, either by juxtaposing different time periods or locations or adding words - something that makes a comparison or a statement or at least a little joke about the image I'm presenting. So WHAT ABOUT Lincoln? What did I want to say about him?

I wanted to say something about his character, about why he still seems so relevant today, about why we love Lincoln so much.

That's when I knew it was time to go back to a little illustrator trick I've used for many years. I call it working the cliché. There's a cliché for every topic (Examples: Cash Problems - a guy pulling his pocket inside out and it's empty; Stock Market - riding a roller coaster; Retirement - rocking chair; Active Retirement - golf course) so when you work the cliché that's where you start. The way I do it is I imagine asking my mother what I should draw. "Mom, the topic is Lincoln and I have to use red white and blue." "Oh," I hear her saying, "the flag. Why don't you put a flag in the background." This is where it gets difficult, because my immediate reaction to the flag in the background idea is "ewww." But you've got to go with the cliché. So OK. Stars. Stripes. Red stripes. I draw a few red stripes on one of the proofs. "Yuck," I think. And then POW, it happens. Stripes. The I Ching. An I Ching hexagram for Lincoln!

I look up the I Ching. Number 8 is definitely Lincoln. The number 8 keyword is "Union." It's about banding together, holding together. The I Ching says, Such holding together calls for a central figure around whom other persons may unite. To become a center of influence holding people together is a grave matter and fraught with great responsibility. It requires greatness of spirit, consistency, and strength.

This was Lincoln, and this is also, I think, the kind of leader that Barack Obama is aspiring to be. 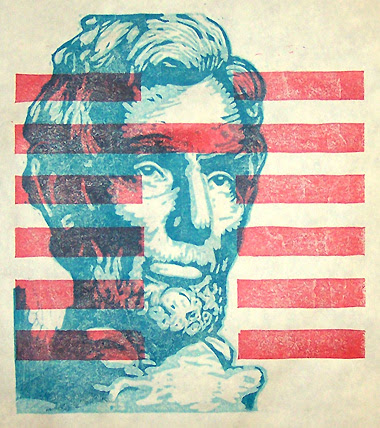 I carved away the background in my Lincoln blocks, printed the portrait in two tones of blue, and then added the I Ching hexagram in red. The ink colors and intensities still need to be adjusted, but this is the general idea. I'll print the edition next week after my Rives paper arrives.
Posted by Annie B at 10:01 PM

Loving I Ching Abe, he and Lao Tzu and having a good chuckle in the after world.

You are amazing Annie! This is simply stunning. Loved the way you just made it all work :)

Thanks for sharing your thought process. Holy cow!

this little snippet into the workings of your mind...rich; simply rich!

Thanks everyone! Yes, being inside my brain is... interesting. Kylie, I hope all is well with you and the fires in Australia!

What an improvement! And yet, there was nothing wrong with the first version, it just wasn't you. This is so much better. And thanks for sharing your thought process. Brilliant result, and what a great contribution to the exchange.

Wow. What a thrilling description of the process, with a great payoff at the end. These wider insights are part of the reason I like your blog. Of course, the art's a draw too...

Leslie, Amie thank you. That was just how I felt too -- there was nothing *wrong* with the first version, it just wasn't me. Thanks for the nice compliment about my blog, Curt.

This is awesome! I love the way you made it work, changed the colors and boom.. blue and light blue instead of blue and red.. and that red overtop.. I enjoy the way it almost looks like an American flag. Isn't printmaking an endless fun puzzle? Have you editioned it yet?

Hi Julia! Thanks. I've got my Rives, but haven't editioned yet. It looks like editioning will have to wait until March, as I'm prepping for a show here in Northampton.