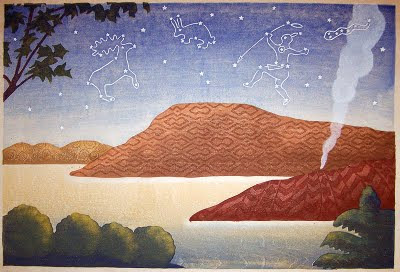 I used these 4 carved blocks plus one uncarved board

It feels fitting to me that I finished this print now, just in time for the harvest festival of Thanksgiving. In this invented landscape I've imagined autumn 1620 in the Connecticut River valley, just a few months before the arrival of the Mayflower some 135 miles away. The Connecticut River valley is where I live, in the city now called Northampton. In 1620 both the people and the town here were called Norwottuck, which means "in the midst of the river."

The hills I've depicted are imaginary, in the sense that no such view of the Connecticut River exists, but the yellow hills in the distance roughly outline three of the seven peaks that make up the Holyoke Range of central Massachusetts and the large orange hill in the center of the print is based on the shape of Mount Sugarloaf just up the river in Deerfield. Deerfield is where the last Indian war in Massachusetts occurred in 1704.

Photo of Mt. Sugarloaf, from TripAdvisor.com

As I described in an earlier post, the patterns on the hills are based on surviving patterns from the neighboring Iroquois and Mohawk nations (originally from upstate New York) and the constellations are imaginary, just me trying to imagine how a culture that subsisted off the land in a migratory way, both hunting and fishing and planting crops seasonally, might see the stars.

Working on this print made me feel sad and tender. I love this valley, this river, this land. The Connecticut River has sustained my family for many generations. And this same land sustained many generations of people before my ancestors ever saw it. Those native people are invisible to me in my everyday life. I felt myself calling them forth as I worked on this print.

This "We Are Pilgrims" series of prints began as an exploration of my own ancestral roots, but my European ancestors would never have survived without the assistance of the Americans who knew this land, these seasons, these animals and plants. For those native Americans I am thankful. Happy Thanksgiving.
Posted by Annie B at 10:38 AM

Beautiful print Annie. I love the sense of "light" and the mood that is depicted through the gradations of color - especially in the sky. For some reason it makes me feel a little melancholy. Possibly my Native American ancestory speaking to me and remembering the "vast unpeopled" land. Happy Thanksgiving!

Thanks Melody. The print makes me feel a little melancholy, too. I'll confess to having wept a couple of times while making it...

I enjoy how you incorporated the patterns on the hills, as well as your choice of color on the water, which conveys a sense of pre-dawn or twilight; the way the water reflects the sky. Lovely!

Really lovely piece. You captured that sense of dusk that is so peaceful. It's a memory of how light reflects on water, for me. Calmness. And the smoke rising lifts you away into the sky. I like the merging of feeling and thinking. It's sad and beautiful. Thanks again, Annie, for sharing your work.

I have problems about telling why i like it...maybe it is because it hits me too emotionally....but I really like how you make the patterns on the hills....which say to me that the indians and the land were closely connected...and I´m thrilled about your colorchoice...all tehse autumn colors and the deep dark in it...and somehow you´ve made a very speciel and intense mood or feeling in this print....
Just great...and actually It made me cry when I saw it....that´s something Annie !

this is beautiful and thoughtful, and so powerful.

very nice. I love the hills and the way that they move. I have yet to try something this large and think that its great that you work large since most people working in moka hanga chicken out. I have to try something large!

Thanks so much Kit, Kris, Anita, Tracy. I'm so happy this is finished for Thanksgiving. Zach, I visited your blog -- you're making some great prints!

It's beautiful. Love the gradiations and the wood grain showing through in the water... and perfect timing. Happy Thanksgiving.

Well, I thought it was almost done, but then I checked back and I saw the smoke and I thought, oh yes. Now I get it. Like the poem that needs every word.
Very beautiful print.
Beautiful, Sad, Hopeful too; one can't look up at the stars in the fall and be anything but hopeful.
Happy Thanksgiving to you too.

And thank you for guiding us along with you as you made this beautiful print - I think this is my favourite of all!

It includes so much and tells a story on every layer of colour - even if it's melancholy it's true to the beauty of the land.

That's just beautiful. It makes me want to be around that distant fire, staring at those constellations...

It's stunning, Annie! Just stunning! The colors, the patterns, the atmosphere, the silence. I love it!

This is a really beautiful work Annie. There is so much in this print to ponder and soak up with the eyes. Congratulations! It seems as if with every print you make, they just get better and better. Happy Thanksgiving.