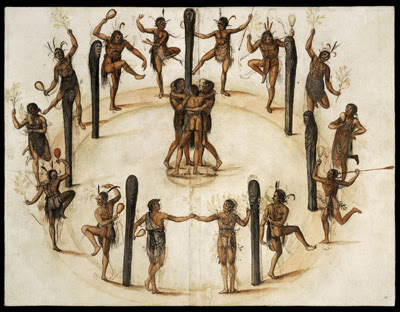 In the late 1500s there was a race going on among the European powers to establish settlements in the new world. Spain was way ahead, with a strong presence in Central and South America, and England was severely behind with no settlements at all. Between 1584 and 1590, English aristocrat Sir Walter Raleigh sponsored a series of exploratory voyages to the coast of "Virginia" (now called North Carolina) to drum up support for a colony among British investors. Raleigh sent an artist named John White on five of those journeys to "drawe to life" the area's natural features and inhabitants. 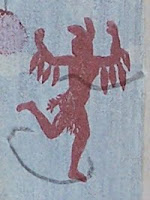 The watercolors that White produced detailed, among other things, the native Algonquian peoples -- their ceremonies, villages, meals and modes of dress. His paintings gave England its first glimpse of America and his work to this day remains vital for colonial scholars.

For the next layer of my "10 Little 9 Little Indians" print, I referenced a figure from the John White painting of dancing Indians at the top of this post. Here's the figure upright. I added a few feathers to the arms.

I then repeated the figure, arranging them in a circular pattern to echo the circular dance arrangement in the White painting, then turned the pattern of Indians upside down for my print. Here's the result after I printed the block. 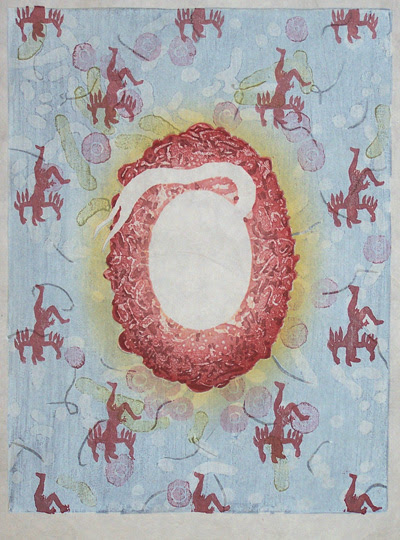 For those of you who are interested in such things, this block was tough to print. Because of the amount of space between the figures, I felt I needed to ink each one individually, then lay down the paper and carefully burnish them with the baren one by one. There are 14 separate figures, so this inking and burnishing was very slow. It took me most of the day to do a run of 35 prints (I'm running 5 test sheets at the front of a run of 30 prints). Here's a shot of the block being inked and the neat little surikomi bake (brush) I used. 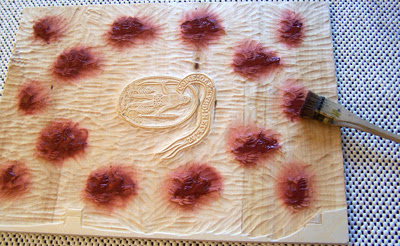 This is looking good Annie. I love the layers and can appreciate the painstaking printing of all those Indians. Love that you've included some historical background in your post.

This image really makes it look like a disease, with the ink bleeding out from the figures. Creepy!

Also, I see you've already got the next bit carved for the centre. Can't wait to see it printed.

Looks great! I've been waiting with great anticipation to see what was coming next, and like Jodi said, I can't wait to see the center printed.

Annie
You devil! Turning those dancers upside down!

Hey, you are doing GREAT work! And I'm referring to your spadework in turning over history, giving us NEW MEANINGS !!!!

Of course, I have to thank you also for the clear and helpful descriptions of your work process for all of us apprentices!

I love you in the New Year as well!

Soldier on, you dancer.

God, I just love the picture of your freshly carved block and the inked up indians. What do you do with your blocks once you're done? Mine are starting to pile up! :-)