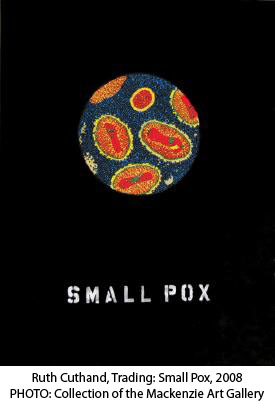 Back in January of this year I completed a print called Ten Little Nine Little Indians that addressed the small pox plague that wiped out an estimated 90% of the native population of New England in the early 17th century. The print features a large red representation of the small pox virus in the center. A few weeks ago artist Andrea Pratt, who blogs at Coloring Outside the Lines, left a comment alerting me to the work of Canadian artist Ruth Cuthand. I did some Googling and sure enough I found another kindred artist working with some of the same material I've been mining.

A Plains Cree (the largest group of First Nations in Canada) and Scots/Irish artist, Cuthand initially studied printmaking, but due to chemical sensitivities she turned to painting and multimedia. The image shown here is from Cuthand's recent "Trading Series" in which the artist uses finely crafted bead work to render microscopic views of the viruses that were brought to North America by colonization.

In a review of "Trading Series" by Patricia Dawn Robertson, Cuthand is quoted as saying, “I did an Internet search for the viruses, and they were just gorgeous to look at." I resonated with this observation and it made me think about the delicate line I often find myself attempting to walk when depicting harsh and difficult topics. It's easy to bash a viewer between the eyes with violent or shocking images, but I think that work which does so ends up appealing only to those who agree with the point of view. I think it's much more profound and powerful to find the beauty even in the horrific, to draw a viewer in with beauty and care and thoughtfulness and invite a more subtle exchange between the work and the viewer to occur. This is a difficult thing to achieve, but Ruth Cuthand has done it with this series. The full quandry of colonization is expressed here so simply: European trade brought new items that revolutionized Aboriginal life (like glass beads), yet was the cause of the decimation of many native peoples .

You can click this link to read more about Cuthand and see videos of her speaking about her work.

And thanks for sharing it with us! Dare I say I hope it spreads virally?

I have taken four university level art classes with Ruth Cuthand, and I love, love, love her work in any media. Her art themes speak to, and for, so many First Nations, Metis and Inuit people of Canada, of the toxic, viral attitudes of racism and oppression they face(d). If you ever get the chance to check out 'Back Talk', bring some kleenex.