Last Friday, after about a week and a half of work, I put the finishing touches on a new web site. The whole process made me think about the history of my site and how much things have changed since I first launched anniebissett.com. 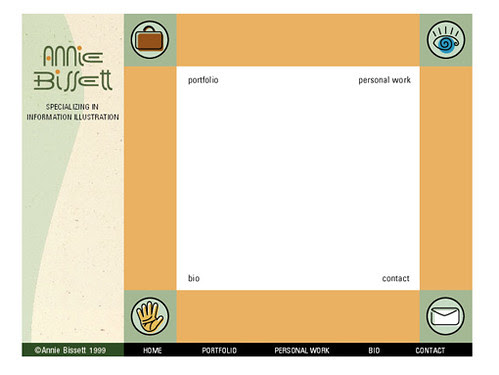 It had rollovers in each of the four corners that would take you to four different areas of the site, and images would appear in the center white area. I designed it, but since there was no drag-and-drop type web software at the time, I paid about $2,000 to have a local tech company called Gravity Switch code it for me. I used that site for a number of years.

Then in 2004 I decided to take the plunge and make my own site with Dreamweaver so that I could update it more easily. I learned just enough of the program to make a very simple site that looked like this: 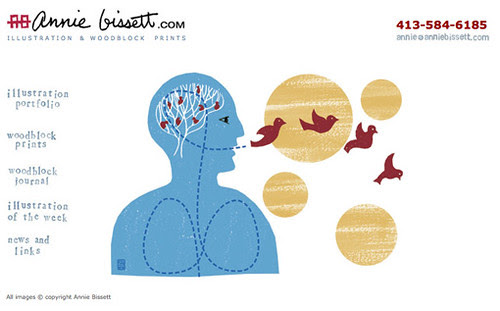 Nothing fancy, but I could add sections as I needed them and image sizes were flexible. I used this site until sometime in 2008, when I noticed that a lot of fine artists were using template hosting sites like Foliosnap, ArtCat, and Other People's Pixels. The sites all looked good and professional, and the idea of not having to mess around with Dreamweaver was very attractive to me.

So I set up this site using Foliosnap: 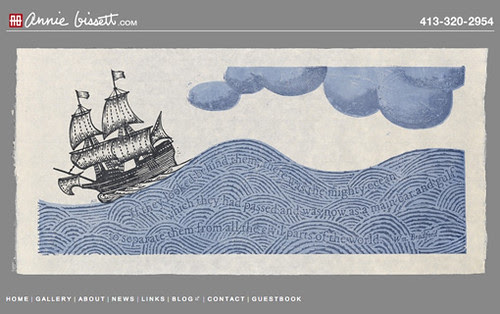 It's pretty elegant and simple. I liked Foliosnap a lot. The interface is easy to use, you can customize it quite a bit, and it's non-flash. I would still be using it, but I ran into a limitation once I published the "We are Pilgrims" book. The Foliosnap template wouldn't allow me to put any HTML links in the image descriptions, so I couldn't have a page for the book that would link to the Blurb site to purchase it. That was a deal breaker for me, so I looked around for an alternative. I settled on Other People's Pixels (OPP), which is cheaper than Foliosnap and almost as easy to use. OPP also allows for more text on each page and, since I'm a little long-winded, that works great for me.

Here's the front page of the new site, and here's a link to it. 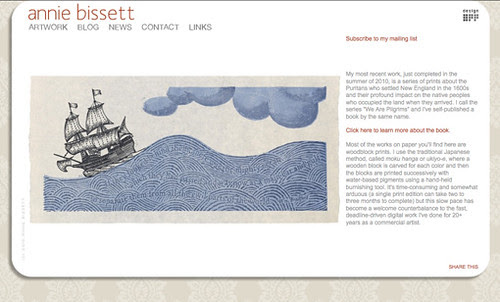 Annie it looks great! I can so relate to your tale of chopping and changing and trying out the new. I'm almost ready for a website change myself :)

Maybe it's an autumn thing... I, too, am twitchy to change website and everything else public. Change and grow we do, and our sites must evolve, too. The next iteration is a beaut, well done!

what a great post! it's fun to see the progression of your website. and, you've inspired me to get going on revamping my much outdated website. Thanks!

What an interesting progression of websites. I never got mine completely off the ground. I see I was way too complicated. Your designs are so crisp. 8-]

Love the latest one.

This is so interesting Annie. And now I'm kicking myself for not keeping screenshots of my old sites (darn it!!!)

I've followed a similar path:
1. very simple written in html following instructions form a book Cliff borrowed from library to cheer me up as a recovered from flu in 2000
2. Used Adobe GoLive to create new improved site - software came in bundle with Illustrator and Photoshop - thought I'd give it a go!
3. Separate Foliosnap site fro my Linocut portfolio with an online shop.
4. GoLive didn't work on my new Mac and Foliosnap not worth the expense, so have now merged my two sites into my all new website created in Rapidweaver - which is so easy to use!

Good luck with the new site Annie - just popping over to have a good look.

BTW
Well done with the condo sale - have a great weekend.
Celia

The new website has several things wrong with it. I'll try to be constructive:

If you're going to put your content within a box like that you should have an even amount padding. 20-40px is a good amount.

Also if the box is going to be centered as if it's 'floating' over the background you should add a margin to the top.

Just like how you leave whitespace around your woodblock prints.


The box is poorly designed

Firstly the radius of the rounded corners is way too big. Notice the odd stop where the curve hits the flat edge?

Also the drop shadow is too much, usually a subtle drop shadow works much better. It takes your eye away from the content too much.


The navigation items are images!

This is bad on several levels. Firstly if the images don't load, how are people going to access your content? Second, it's a pain to create new images whenever you need to change the wording. By the looks of it you are using Helvetica, this font is included on most computers these days so you can acheive the exact same thing (but better) using straight html and css.

It could also do with a bit more space between the 'logo', navigation and drop down navigation.

It's very light, which is okay. However it is hard to read.

You should also increase the line spacing so that when people look at it, it's not a daunting block of text that no one can be bothered reading.

Vertical text is bad unless you're Japanese. Put it outside and underneath the white box, horizontally.

The 'Other People's Pixels' logo is to dominant. At first I though it as your logo. You should have your brand above anything else, after all it is your site.

I'd place it with the copyright info and make it subtle.


I hope that this helps you improve your website.

Wow, Anonymous, I certainly appreciate that it must have taken you quite a while to write all that up. However, I must note that, as I stated above, this is a TEMPLATE provided by Other People's Pixels (OPP). Although I can change the cosmetics of it (colors, fonts, all content) I have no control over how it's constructed.

You might consider passing this info along to Other People's Pixels so that they can improve their product.

It didn't take that long to type up.

I had a look at what you're getting from Other People Pixels and think that you're paying too much.

Have you tried Wordpress? It is FREE and has all the capabilities that the Other People's Pixels product has. There are also hundreds of fantastic FREE templates that are superior in so many ways compared to your current template.