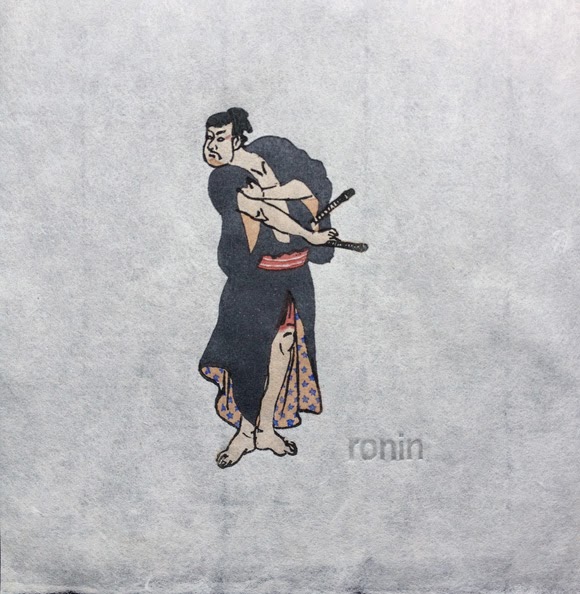 The NSA's RONIN is "a tool used to detect TOR-node IP-addresses." TOR is a software that enables online anonymity by directing traffic through an intricate network of relays that conceal a user's location. It's a powerful and free software which the NSA itself describes as "the King of high secure, low latency Internet anonymity," so it's not surprising that they would want to crack it.

The word rōnin is Japanese, and it indicates a samurai with no lord or master. During Japan's feudal period (1185-1868), a samurai became masterless if his master died or was defeated, or if the samurai was cast out of his master's service for some reason. Many rōnin became mercenaries or bodyguards while others became criminals. I don't think I need to elaborate on the humor of the NSA using the word rōnin in any description of themselves. The more we learn about the NSA the clearer it becomes that they indeed serve no master.

I modeled my rōnin on a print by Katsukawa Shun'ei, an ukiyo-e artist who lived from 1762-1819 in Tokyo. Shun'ei made a lot of prints of both warriors and kabuki actors, this being an actor playing a rōnin. Shun'ei tended to draw his figures in unusual positions, often curved as this figure is.

On a related note, the 2011 American crime drama "Person Of Interest," which revolves around a former CIA officer who is recruited by a mysterious billionaire to prevent crimes in New York City, makes frequent references to rōnin and wandering samurai.
Posted by Annie B at 5:04 PM

Lovely as usual. I'm always impressed by what you can tease out of a block of Shina. Very graceful figure,nice colors and I like the kimono pattern.

Thanks, Andrew. I do often feel like I'm teasing the shina. Or more accurately, like the shina is teasing me. Whenever I try to do linework this fine on shina I think to myself "I should get some cherry ply to have on hand," but then it's over and I forget until the next time. I did cuss my way through the printing of this linework -- that's probably why it looks so good.

Now I know what this "Ronin" is that the Person of Interest fellow (Harold?) I forget his name, refers to. From now on I shall be informed thanks to Annie B! And, it is a fabulous print, as always.