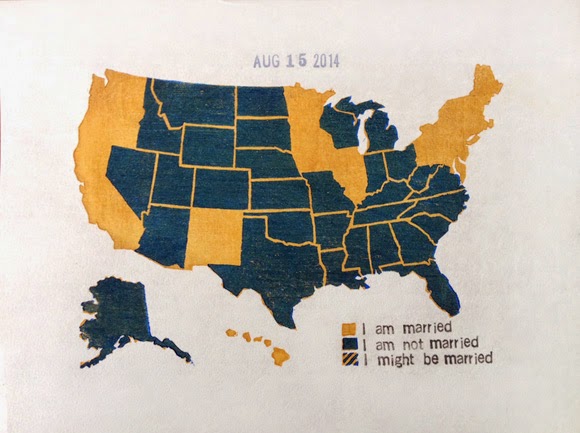 Every August (or thereabouts) on the anniversary of my legal Massachusetts marriage to my longtime partner Lynn, I update this slow reduction print series called Sometimes I'm Married (see the series here). I'm a few weeks late this year, but here's the 2014 installment. Four states have been added to the 'I am married' column: Oregon, New Mexico and Pennsylvania by court decision, Illinois by legislative vote. There are twelve states where marriage bans have been overturned but appeals are in progress, a situation which almost guarantees that higher courts will take up the issue. Supreme Court watchers believe that the court will accept a gay marriage case sooner rather than later. I could have labeled these state 'I might be married,' but with the situation so fluid right now I've decided to ignore that category, which I used in the past for states where there was no legal policy at all (neither a ban nor a legalization, and no policy on reciprocity with other states).

When I started this series in 2008 I wrote, "I plan to revisit this very gradual reduction print every year around our wedding anniversary until all the states are one color. Then we can frame the series and hang it on our nursing home wall." How wrong I was! This map will likely be all one color well before Lynn and I reach the nursing home, perhaps as soon as next year! Stay tuned.