As I've been working on this series of "Pilgrim prints" I've drawn on any number of old colonial engravings and woodcuts both for style and content. No worries about copyright, as these items are old enough to have been in the public domain for centuries. 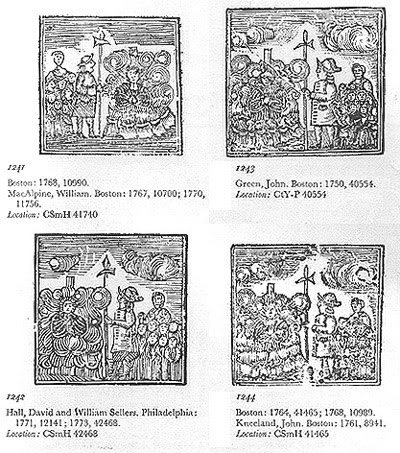 But I've noticed something along the way. Early American printers and publishers used to copy each other all the time. Above is a page from the book Colonial American Printers' Ornaments & Illustrations showing four different versions by four different 18th century engravers of the same illustration, an illustration of the martyrdom of John Rogers that's probably based on an even earlier 17th century English engraving. There are many examples of this throughout the book.

The First American copyright provision was the Copyright Act of 1790. This act, modeled on the English Statute of Anne, granted authors a monopoly on their writing for a period of fourteen years and the right to renew for another fourteen years. It was not until 1909 that the laws were expanded to include illustrations, maps and other graphics. And now look at the mess we're in.

So in the spirit of my forefathers, I have lifted the bottom portion of this 17th century Flemish engraving about God's judgment: 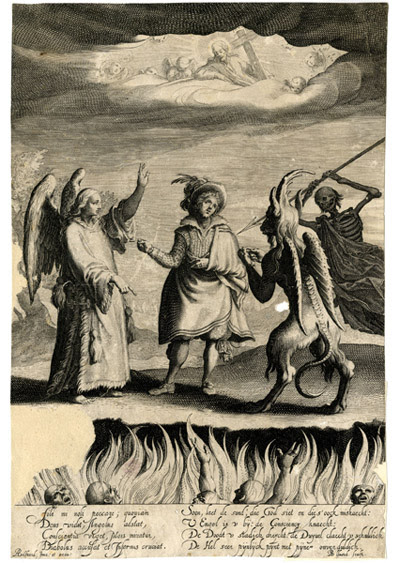 to create my own drawing of Native Americans burning in hell's fire: 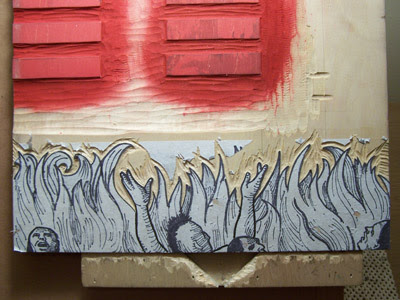 As you can see, I'm carving this on a previously-used block. I like recycling as much as possible (see previous post on re-using blocks). I drew this with a fairly large-tipped Sharpie pen, and as I carve I'm being careful to accurately preserve the qualities of the drawing - the rounded ends of the lines, the thicks and thins, the blobs created by the marker. I like the idea that this is a woodcut based on an engraving that will look like it was drawn with a Sharpie. Nice mix.
Posted by Annie B at 5:23 PM

I like your sharpie woodblock technique. Did you draw with the sharpie or pencil first?

Nice touch with the Indian head, front and centre.

@Ellen 0- yes, a little pencil first. I also made a copy of the original sketch to actually paste on the block so I'd have an extra in case I messed up.

It looks like some fun carving to me. Can't wait to see how it looks printed!