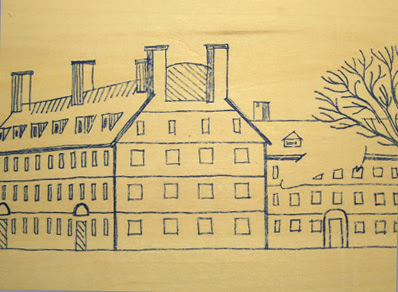 Portion of a drawing on the block, ready to carve

Almost exactly one year ago, on a trip to Boston for Valentine's Day weekend, Lynn and I wandered into the Harvard museums and found a small exhibit about an excavation that had been done in Harvard Yard in 2007 in search of the old "Indian College." Founded in 1636, just 16 years after the arrival of the Pilgrims at Plymouth, Harvard was formally chartered for "the education of the English and Indian youths of this country." The first brick building on the campus was the Indian College, built in 1655. The Indian College was funded by an English charitable foundation, the Society for the Propagation of the Gospel in New England, and it eventually housed the college printing press, which produced John Eliot's Indian Bible.

Because we know how it all turned out for the Indians, it's easy to be cynical about the motivations of the founders of Harvard College in educating Indians. Yet, as in much of American history, there's an idealistic and utopian quality to the mid-17th century Puritan vision of how relations might be between whites and Indians. Harvard's first President Henry Dunster is quoted as saying he desired “to make Harvard the Indian Oxford as well as the New-English Cambridge.” The vision put forth was one in which Indians and English were bound together in scholarship, with Indians not just learning English and the ways of Christianity, but teaching their language and ways to to the white students as well.

Although I've been a little under the weather this week, I've been quietly starting work on a new print about the first native Americans to attend Harvard.
Posted by Annie B at 5:25 PM

Really interesting post, and thanks for the link. I'll be interested to see how the image develops.