After a fair amount of research about the color of Muhammad's robe, I've concluded that Muhammad is most often, but not always, depicted wearing a green robe. In his book Islam and the Heroic Image, scholar John Renard states, "that robe is one of relatively few specific items in the heroic religious iconography of Islamicate painting," so I'm going with green.


Yesterday a friend wondered how many blocks were carved for this print and how I broke down the colors, so I thought I'd show you the 6 blocks that I used. 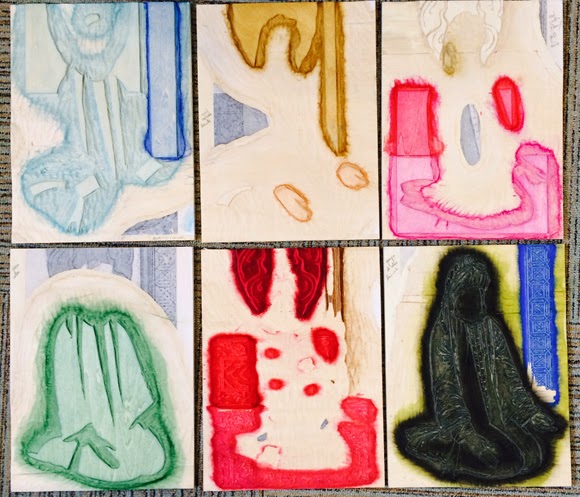 A couple of notes. First is that the halo I carved on the upper right block is for applying glue for gold mica (next step). Second note is that in order to economize on wood, I used a single block for the two different magenta colors on the rug and back wall. I carved a thin line between the two areas so I would know exactly where to ink. The white line isn't visible in the final after everything gets printed over it. The third thing you might notice is that sometimes if I've ganged up a lot of colors on one plate I carve away portions of what I've already printed so that the inking is easier for the next color. On the keyblock for example (lower right), you can see that I carved away some of the line work that had printed blue so that I could more easily ink the gray lines around the figure. Of course, this means that I can't ever re-print this set of blocks.
Posted by Annie B at 12:32 PM

Email ThisBlogThis!Share to TwitterShare to FacebookShare to Pinterest
Labels: A Real Fake