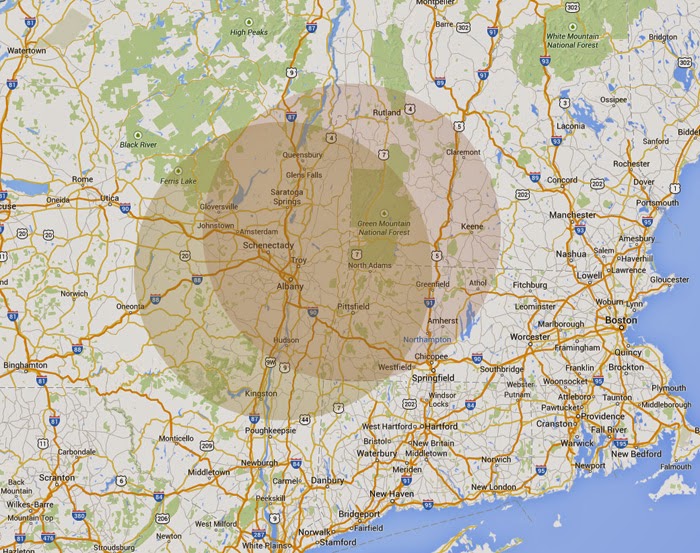 There's a tradition in printmaking that doesn't really exist in other art forms called a print exchange, or portfolio exchange. Print artists are invited to participate and each member who agrees to participate makes an edition large enough to supply one print for each participant plus a couple of extra. Exchange coordinators then usually collate and box the sets and each artist receives a folio. In addition, the extra sets are generally shown in galleries or placed in collections.

For various reasons, not the least of which is that I don't enjoy making large editions, I don't participate in exchanges often, but I like to do them occasionally, especially when the exchange is associated with a group of artists I want to support or become better acquainted with. A few years ago I participated in the Zea Mays anniversary portfolio called Ten, and this year I've signed up to make a print for an exchange between artists in the "upper northeast," which is defined as a 60-mile radius from Troy, New York, and a 60-mile radius from Bennington, Vermont. I'm looking forward to getting to know some new artists in my region.

Print exchanges often have a theme, so here's the brief for this one:

A Real Fake: Truth In the Making (2015)
The concept of this portfolio explores notions of creativity and the awareness that a work of art is never an absolute. As creative individuals, we are familiar with our own internal creative landscape; we might refer to it in terms of thinking something up, putting something down or going with the flow; regardless, our creative moments happen within a time/space relationship. A
work of art represents the interfusion of our thoughts and decisions, and as such, the end result testifies to the creative moments we experienced during the making of the work.

“Art enables us to find ourselves and lose ourselves at the same time.” -Thomas
Merton, No Man Is an Island

A work of art is never fixed or absolute: it doesn’t exist independently and once
released, the work evolves and is often interpreted in different ways by the viewer; the
truest part of the work resides in the original act of creation.

The part of the brief that struck me and that I plan to work with is the title, "A Real Fake," and the line "A work of art is never fixed or absolute: it doesn't exist independently and once released, the work evolves and is often interpreted in different ways by the viewer."
Posted by Annie B at 11:24 AM

Email ThisBlogThis!Share to TwitterShare to FacebookShare to Pinterest
Labels: A Real Fake