Plans for a New Print

It's been almost a month since I completed my last print. During this time I tried to get a new print going, but couldn't seem to find an image or concept that I liked well enough to commit to. Finally I've got something, and I think it may become a series. Here's the sketch: 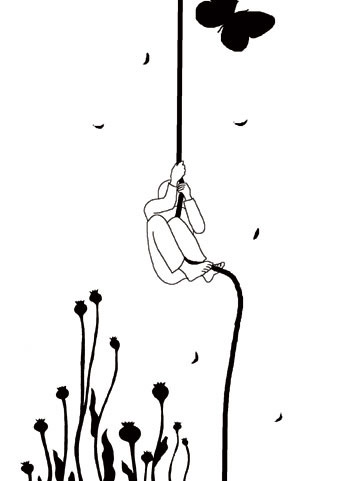 This is based on an image that came to me one evening while I was contemplating the huge effort it takes to make changes in life, to move out of old habits. In actual fact I hate rope climbing. It takes a massive amount of brute strength that I don't have. But this is fitting, because I also hate leaving comfortable old habits, even when they've outlived their usefulness.

Anyway, I'm envisioning a series that shows various stages or interesting spots in the human journey and the common denominator in each print will be a rope. It'll be like 36 Views of a Rope. Except I doubt it will be 36. Probably more like seven.

Well, we'll see what happens. Tonight I ordered some nice expensive paper from McClain's. No more fooling around with cheap paper!
Posted by Annie B at 9:44 PM

this looks like it will be a very intersting series!