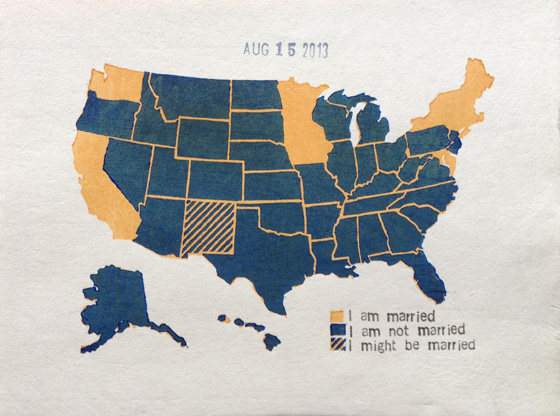 On August 15, 2004, my partner Lynn and I, who had already been together for 13 years, were married in our home in Massachusetts in the the company of 60 friends and family. This was three months after our right to marry had been affirmed by the Supreme Judicial Court of Massachusetts, which found that there was no “constitutionally adequate reason” for denying marriage to same-sex couples. For the next four years, I was only married in Massachusetts, which made for some interesting (and confusing) situations. Finally, in 2008, California (for a brief time) joined Massachusetts in allowing gay marriage, so that year I began making a yearly map of where I am and am not legally married. The series is titled “Sometimes I'm Married” and I've typically made a new version of the map each year on my August 15 anniversary.

This year, by virtue of several legislative actions plus a court ruling, California, Minnesota, Delaware and Rhode Island have been added to the ‘I am married’ category. It will be interesting to see what happens from here on, as various states react and respond to the recent Supreme Court ruling striking down DOMA.

Welcome back, California! Thank you, Minnesota, Delaware and Rhode Island. And happy anniversary, dear Lynn.
Posted by Annie B at 9:33 AM